by Boris Jódar on 3rd March 2020 in Blog, Mexican, Recipes

Refried Beans were one of the keystones of my cooking at Hot Milk Cafe. We were using them in Burritos but also in Chicken and Mushroom Tacos. You can’t miss them if you are cooking something close to Mexican or Tex-Mex food. Today I’m bringing you a recipe for Refried Beans -Frijoles Refritos, in Mexico-, not the one we used at Hot Milk but something closer to what they do in the Aztec country. You can have them in burritos, tacos, quesadillas or as a dip, with some tortilla chips –totopos– or flatbreads.

Do not let the lard to intimidate you. It’s a kind of weird ingredient but commonly used in the Mexican cuisine -heritage from the Old Christian Castillian traditions-. Lard gives some distinctive flavour to this dish and alongside avocado leaves, they provide the touch of authenticity we are looking for in this recipe. However, if you have any kind of racial, religious or dietary prejudice against lard, substitute it for olive or sunflower oil; maybe butter, if you are one of those who give a bad reputation to people like them.

How to make Authentic Refried Beans

Ingredients (serves for a dinner for 4 people) 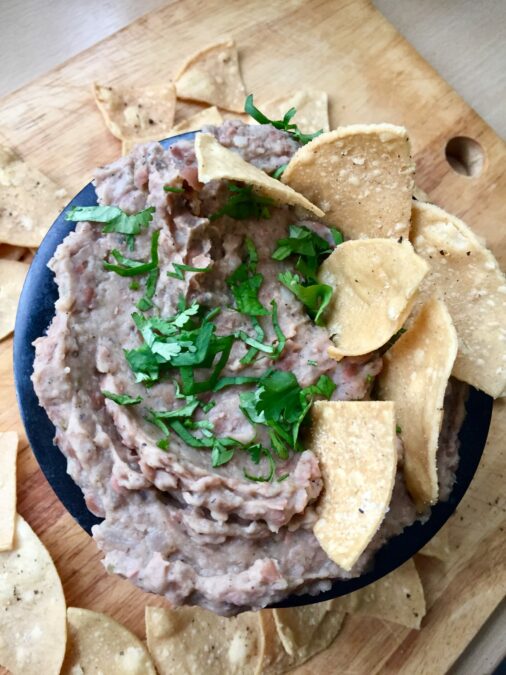 Let’s start by frying the onion and garlic in the lard.

Once they are nicely golden brown, add the beans with their liquid.

Toast the avocado leaves for few seconds on both sides in a dry frying pan. Then, grind them with a pestle and mortar using a bit of salt and pepper until you get a fine powder. You can use a blender or a food processor if you don’t feel traditional that day.

Add the avocado leaves powder to the beans alongside the oregano and the lime juice.

Cook on medium-high fire until most of the liquid has evaporated and the beans start to get thick. Add some more salt and black pepper, if necessary.

Blend them until you get a thin paste, if you want them smooth. If, on the other hand, you would like you want them a bit chunky -more like the Mexican way-,  smash them using a potato masher or a fork, until they get the consistency desired.

Transfer them to a bowl, ready to serve or use, or to a food container. You can keep them in the fridge for 4 or 5 days.

If you like beans and Mexican recipes, why don’t you give a try to our Mexican Bean Salad?