But let’s start from the begining. Its real name is Dorilocos. I call them Doritos Locos -Crazy Doritos- to give a little clue for those who don’t know them yet. Yes, it is a Doritos based snack and it is loco because of all the different ingredients, sauces and condiments you can top them with. From veggies as cucumber and carrot to other snacks as seaweed or japanese peanuts, finishing with a drizzle of hot sauce -Cholula or Valentina, principally-, a sprinkle of chilli powder and a squeeze of lime.

Crazy, isn’t it? Specially if we think that the riskiest thing you do with Doritos is cover them in cheap cheese and add some guacamole, refried beans -or chilli con carne, if you feel special-, jalapeños and call them Nachos. 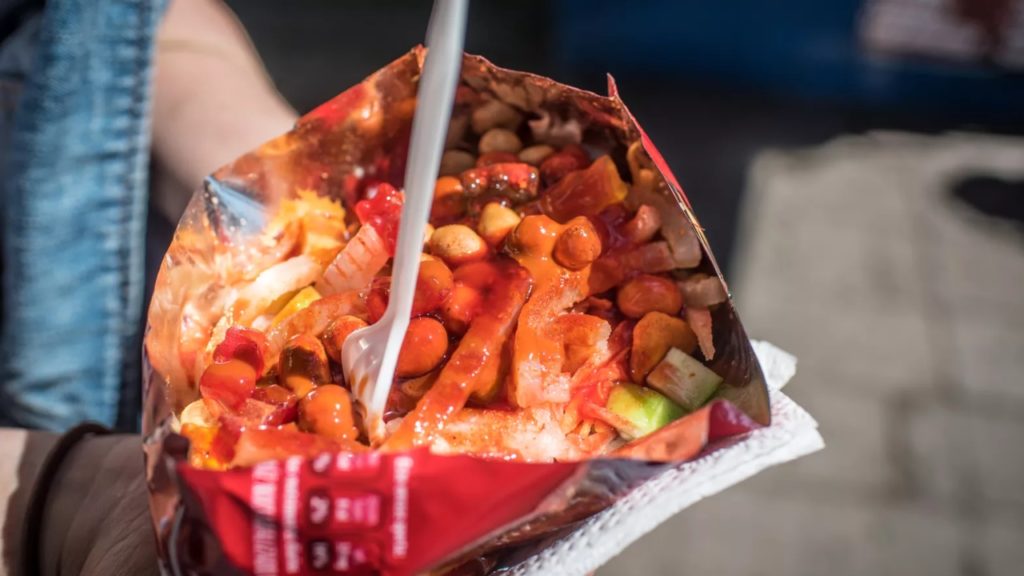 But this Doritos Locos are nothing compared to the original and only Dorilocos you can find in the streets of Mexico City. In there, Doritos are served straight from the bag, covered with diced cucumber, grated carrot, jicama, cueritos -pickled pork rinds-, japanese peanuts, gummy bears -yes, gummy f*ck*ng bears-, Tajin powder -chilli and lime salty powder-, Miguelito powder -a kind of sweet and sour chilli powder-, Valentina sauce, Chamoy and squeezed lime. BAM!!! Your loaded nachos just turned into baby food.

But it’s ok, cry not, baby. It’s not your fault. Who could imagine that there could be a Mexican so crazy to create this hodgepodge of ingredients, flavours and textures with a poor bag of innocent Doritos? The Mexican who created Tostilocos. Because, my friends, while in UK you feel adventurous having a bag of tortilla chips from the new comer brand Tostitos as the company wants; long time ago, someone in Tijuana -I guess hangover but still drunk-, decided to create what is considered the precursor of Dorilocos. But that’s a different story that I will tell you some other day if you behave yourselves.

Dorilocos are considered by loads of people another step on the junk food ladder, something foreign that screws people’s health, specially kids and teenagers. I totally disagree. There’s nothing more Mexican than take a foreign dish and make it Mexican by adding more ingredients. Mexicans created totopos. USA added artificial flavours and colorants and sold them as Doritos. Mexicans took Doritos and created Dorilocos. Is not this a kind of cultural appropriation revenge? Love it!

At the same time, Doritos Locos is mainly a vegan and vegetarian snack. Think about it: raw veggies and fruits, with some peanuts and hot sauce. Even if Doritos are the opposite of healthy, is not this a healthy and funny way of enjoying a bag of these tortilla chips? Everything is about balance and in Doritos Locos you’ve got the right balance between healthy and unhealthy stuff. The rest is on you, if you are an active person or a couch potato. 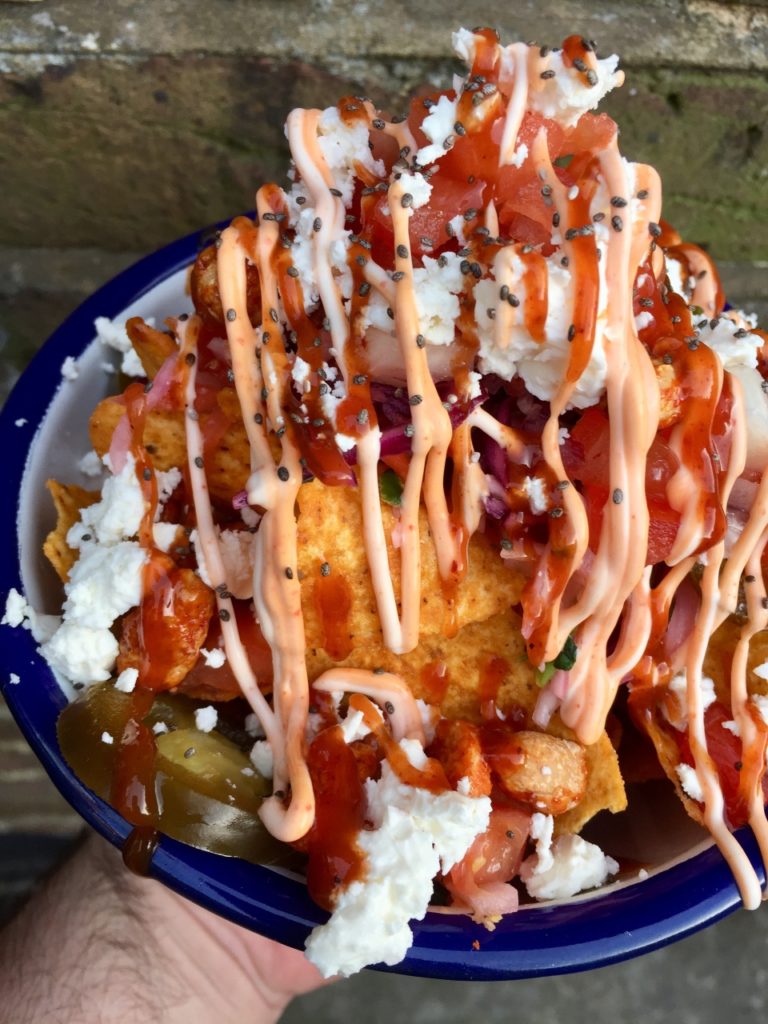 Anyway, we came here to play and enjoy. So, let’s play and make our version of Crazy Doritos. We will use ingredients you can easily find in any supermarket or convenience shop but keeping it as Mexican as possible.

This recipe is not canonical. You can add or remove as many ingredients you want, as long as you keep them different from Nachos. And that means not adding any of the usual ingredients you can find on a dish of nachos: melting cheese, guacamole, salsas from a jar, refried beans or chilli con carne. Do me and yourself a favour and, please, do not f*ck around and pretend your greasy nachos to be Doritos Locos. I’m begging you. I’m not a Mexican myself but I’m a taliban with the food I love. So, please, respect.

If you are at home or are preparing this for a party, be civilised and do it on a plate. However, if you feel lazy or want to have the real experience, put everything inside the Doritos bag.

Dice the cucumber and set aside. Seeds on or seadless is something totally up to you. Do not annoy me with lickle boring details.

Peel the carrot and grate it roughly. You can chop it like match sticks if you feel powerful in the kitchen that day. Set aside.

Now, the pico de gallo. Cut the tomato in quarters, remove the seeds and dice it in little cubes. Peel the onion and cut it in pieces the same size as the tomato. Mix both veggies in a bowl with the chopped coriander and set aside.

Now it’s time to assemble your Doritos Locos. Put them in a plate or cut the bag longwise. Add the cucumber, the carrot and the pico de gallo. Add the japanese peanuts and season everything with the Mexican seasoning or some chilli powder.

Squeeze a quarter of lime, drizzle with the hot sauce and serve. You may need a fork to eat this. Salud!