Ensalada Campera is an old school salad in Spain. I don’t know it’s history but it seems to have been there since the beginning of time; and its sole name gives me memories of Summer lunches at school and at home as a kid. Then, I grew up and stopped eating it until now. I don’t even remember when it was the last time I had it. Maybe that’s why I have the feeling it’s an old school dish, something from the 80’s and 90’s that has disappeared from the actual Spanish gastronomy.

Is Ensalada Campera still a thing in Spain? Who knows? You better to keep this recipe in the case it’s about to became a “reliquia” from the past.

How to make Ensalada Campera

Ingredients (serves 4 nice portions as a side): 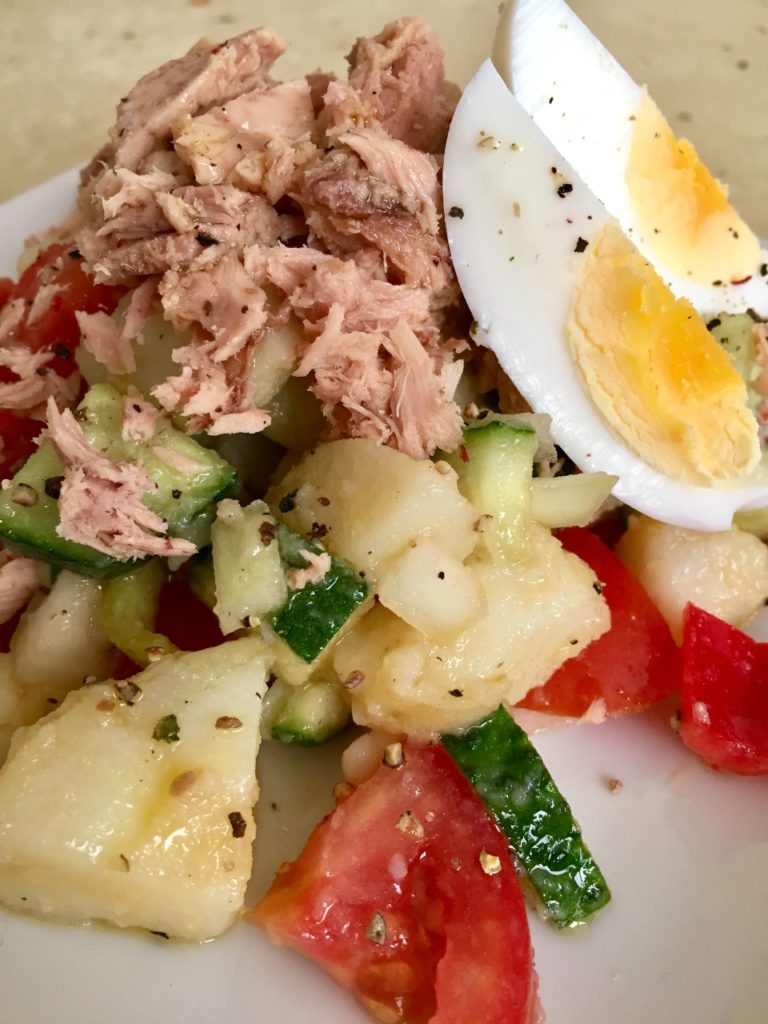 Boil the potatoes whole, without peeling or cutting them in salty water for 45 minutes. You will know they are ready when you insert a skewer or a knife in a potato and it will come down easily.

Once the potatoes are done, remove them from the hot water and keep them in a bowl with cold water. You may need to change the water once or twice to make sure the potatoes cool down quickly.

When the potatoes are cold enough, just peel them and chop them in medium size cubes. Put them in a bowl and keep them aside.

Your egg. Save time, water and energy by boiling it at the same time and in the same pan as the potatoes. Just cook it for 6 minutes after the water starts to boil and take it out after that time. Leave it to cool down, peel it, chop it and set it aside.

You can work on your veggies while the potatoes are cooking or cooling down and keep them in the fridge, waiting for your tubers to be ready.

This is easy. No secrets, no stories. Wash your tomato and your cucumber and chop them in medium size pieces. Peel your onion and chop it in small pieces or slice it thinly. Wash the peppers, cut them in half lengthwise, remove the seeds and chop them in pieces the same size as the tomato and cucumber.

Once all the veggies and egg are ready, put them altogether in a bowl. Add the tuna that you have already drained and crumbled.

Dress with some good olive oil, a nice vinegar and add salt and black pepper to taste. Mix and try it. Add some more dressing or salt and pepper if necessary.

Keep the salad in the fridge until few moments before you were going to eat it to help the flavours to mix and develop, but take it out with some time in advance so it’s still fresh but doesn’t taste like fridge.

This salad is a perfect side for croquetas, chicken escalope or Spanish omelette. Salud!